Riclin Firearms Training, LLC
Helping You Be Safer in an Uncertain World...

Archive for Tip of the Month

Take the 6-second church test. Can you make a headshot in 6 seconds at 12 yards? This is based on what happened at the church in Texas recently where a member of the church security team stopped an active shooter in his church. The test is 1 headshot at 12 yards in 6 seconds, from concealment. It is best done cold…in other words no ‘warm-up’ or ‘practice’ shots. You’ll probably find that the time is easy to make. The difficult part is hitting a target as small as the head. Try it. And practice it.

What Does Your License Say?

You’d be surprised how many people tell me they either don’t shoot much or haven’t shot since they say me in their last class 2 years ago.

Remember, if you ever fire your concealed handgun in a self-defense situation, you are responsible for each and every round that you fire. I’d be happy to go out shooting with you sometime…just give me a call.

Practice When It’s Not Perfect

We all enjoy a nice day with good weather at the range, but what are we really learning? Practice in the rain sometimes, when it’s windy, in the snow, when it’s very hot, and when it’s cold.

I just finished the Pecos Run and Gun event (a 5.5-mile loop with 8 shooting stops) and it rained on me the first mile. When I got to the first stage I was soaked, my rifle and gear was wet and it was raining so hard I couldn’t see all the targets. Great fun. We had prepared for the heat and what we got was rain and mud.

You never know what the weather (and circumstances) will be until you get there. And remember, the defensive use of your handgun will happen in seconds and the weather won’t care if you like it or not.

Be careful about how you present yourself. This article, from A Girl With a Gun, has some food for thought about how you present yourself as a gun owner and a concealed carrier. She points out that if you are involved in a self-defense situation and are forced to shoot, everything you have ever done, including what you post on social media as well as any stickers on your vehicle, may come under legal scrutiny. Will that be to your benefit or detriment? Take a few minutes to read this article and give it some thought. 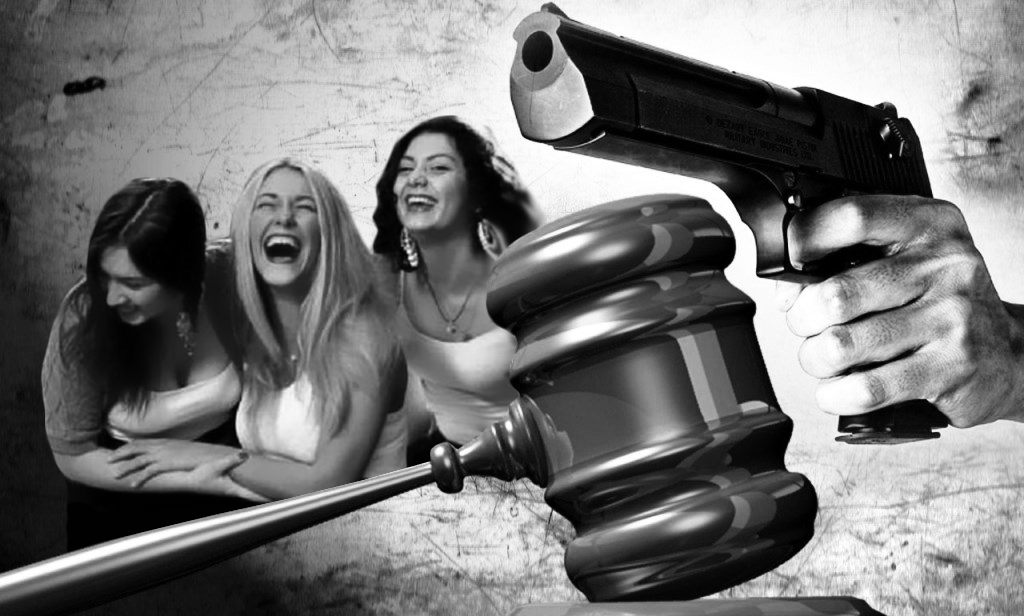 Lethal Force Is No Laughing Matter
Your character is on the line and your defense won’t like your negative public image, especially if your actions were reasonable and justified.

Watch how fast the encounter occurs in this video. Could you have drawn your handgun before the attacker was on you?

When you receive your original or renewed concealed carry license, get out your electronic calendar, move ahead 2 years (2.5 years for veteran’s licenses) and put a reminder to do your Refresher.

It’s also not a bad idea to go forward to the expiration year and make a note to do your Renewal Class as well. The NM DPS Concealed Carry Unit has been mailing out notices to remind people to do their Refresher classes.

Practice With Your Bedroom Gun

I know many of you have a handgun in your bedroom. When was the last time you practiced with it? Does it have a light (or is a flashlight handy)? Have you checked lately too see if they still work? When things go bump in the night is not the time to discover that you have a dead battery.

Do some realistic drills at the range with your bedroom gun.

You’ll find it’s a lot different than the standing up and shooting that you normally do. Something you should think about doing occasionally.

Be extra alert as you go about your holiday activities. It is so easy to get caught up in your social activities and shopping that brings you into close contact with lots of people, including strangers, that you tend to become complacent.

Be extra aware of those around you. Most of them mean you no harm, but there are always those who are looking to harm you or take advantage of you.

Be Extra Aware of Your Surroundings During The Holidays

The holiday season is upon us. Now is the time to be extra aware of your surroundings.

You are probably going to be in places with lots of people at times. And you may be carrying money or other valuables. Be cautious, especially if approached by strangers. Always have a  means to defend yourself and the loved ones with you.

Remember, your safety is your responsibility.

The Failure Drill, when practiced and perfected, is an extremely useful drill that saves lives.

The modern Failure Drill is accomplished by the shooter firing two center-mass shots as quickly as those shots can be delivered into a target and within an 8-inch center mass area. Following the second shot, the shooter follows through and assesses if their target still presents a deadly threat. If the target is still a threat, then the third shot is taken and ideally hits the area between the eyebrows and the upper lip. Note: The shot is aimed at this area of the skull because this is where the bone is thinnest.

The Failure Drill is more difficult than it sounds.

The most difficult part of the Failure Drill is the changes of shot delivery that the shooter must make. The first two shots should be fired as quickly as the shooter can center his hits. Then, they must slow down enough to re-evaluate the situation and with precision deliver a headshot.

The history behind this technique (and something to practice): The Mozambique Drill: A History and How To

0 Categories : Tip of the Month
Next Page »

In addition to our scheduled classes, private, individual or group sessions are available and may be scheduled at your convenience, on demand. We are willing to work with you to accommodate any particular firearms training and tailor our training classes as needed.

We are looking forward to training with you!

To provide basic and advanced firearms training to law abiding individuals and groups in order to enhance their knowledge and skills of the recreational and defensive use of firearms.